Last weekend I helped out at Melbourne’s “Windows Azure Bizspark camp”. It was a 3 day event aimed at fostering innovation while also training small start ups in how to pitch an idea and seek funding.
You may remember that I participated in the last Bizspark camp, and came runner up with my application ‘Beachy’. It was the same event but this time it was on Windows Azure instead, and I was helping out rather than being an attendee.
More basic information about the event is on the Australian Bizspark website.

My involvement over the weekend was to assist each of the teams with their ideas, giving advice & assistance with any Windows Azure, Silverlight and Windows Phone 7 based questions. At the same time I would also sit down with each team and get them to talk me through their business ideas. Getting them to focus on the one or two key points that they would pitch to the judges, and not just rely on the fact that they “wrote a lot of really cool code”. Where I could I tried to get them to focus on what exactly they would show the judges on the final day, and to be sure to polish around those key points.

I was also impressed to see that one of the largest gaming websites (ign.com), did a blog post on what Bizspark and the Bizspark camp were http://www.ign.com/blogs/kiera2/2011/02/05/whats-a-bizspark/

The first day consisted of a compressed training day for all the participants. Graham Elliot and Mitch Denny delivered training covering Azure basics (Windows Azure Compute, Management, Diagnostics, Storage, SQL Azure, App Fabric). The slides from the training day have been uploaded to the internet for anyone to download and go through themselves.

Another useful training guide if you wish to go through it yourself is to use the latest Windows Azure training kit. 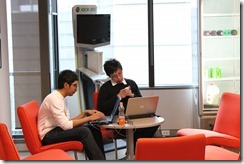 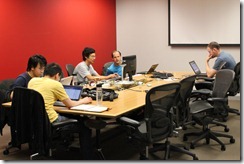 The rest of the event was mostly allocated to the teams, to let them build their applications. Most of the teams were 2 people with a few of the larger ideas having teams of 3. All of the teams went to find their own space around the Microsoft office and worked on the projects. They all worked really hard while there at the office, and judging by the bags under a few eyes the next morning, many of them obviously pulled all nighters back at their own places. This was meat of the event, the teams needed to build enough of the application in order to have something to show to the judges the next day. But they needed to be focused and disciplined, there wasn’t enough spare time to waste on things that wouldn’t be shown. They needed to decide what they were going to demonstrate to the judges the next day and focus on enabling enough of their app to demo. 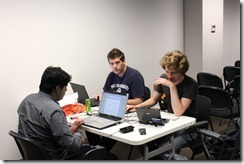 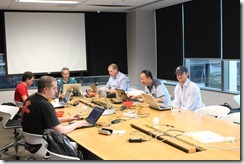 Of course, there was a pizza lunch to keep the attendees going! 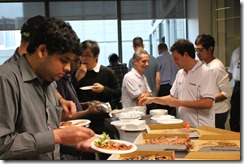 During those 2 days, Catherine Eibner organised 2 speakers to come and talk during the lunch times. This helped to try and break the day up a bit and give the attendees a chance to clear their heads. 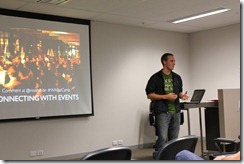 On the Saturday Ross Hill (twitter: @RossHill) talked to the attendees about the importance of networking when creating your own start-up. Events are important and enable you to meet the type of people that you need to help you get your start-up off the ground. Ross co-founded one of the most successful entrepreneurial networking events The Hive which runs in Melbourne, Sydney and Brisbane. I recommend you attend the hive if you live in one of those cities and are interested in the entrepreneurial spirit.

I didn’t record Ross’ talk unfortunately, but I did manage to get some of the URLs he listed of other good events to attend

On the Sunday, there was a talk by Jack Delosa (@JackDelosa) who runs a group called Entourage which “is a movement which encourages and facilitates entrepreneurship in the 18-35 demographic”.  More information about Entourage can be found at http://www.the-entourage.com.au/

Everyone on Twitter was amazed at how much information he was able to cram into 45 minutes. He was able to distill down the basics of what anyone who is thinking of creating a startup needs to know, from the idea, raising capital, creating your Business plan/Information Memorandum/executive summary.

This is a MUST WATCH video for anyone thinking creating their own start-up company. 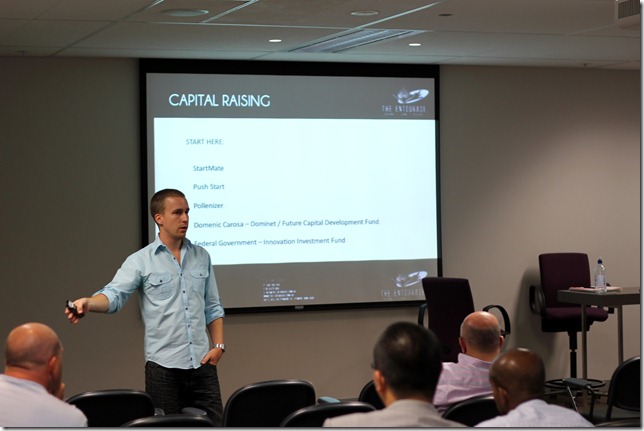 On the final afternoon, some of the judges set in a room and allowed each of the teams to have a chance to do a practice pitch. This allowed the teams to have a first run, and get feedback on the sorts of things they should focus on when doing the final pitch to the judges. This in itself was a valuable experience for all of the attendees.

All the judges arrived and the teams took turns to do their 5 minute pitch, and then have a chance for 5mins of question time from the judges.

The judges then spent half an hour debating amongst themselves, trying to determine the winner.

The final winners were: 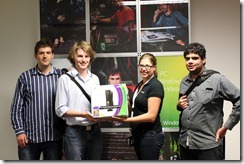 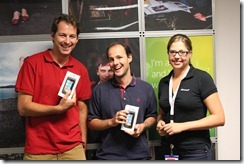 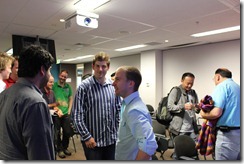 Videos of the pitches

I recorded all 11 pitches from the teams, which I will upload slowly over the next few weeks.

Other coverage of the Azure Bizspark camp

It lists all of the Microsoft Australia staff that are working with Windows Azure platform. If you looking for a Microsoft contact to ask questions of, they would be a great place to start.

On Friday 16th July, I headed down to Hobart to present at the Hobart.Net usergroup.

It was a good turn out for a Friday afternoon and Christopher Baker as usual had organised a great venue for the event to be held at. It was hosted at the Hobart casino in a members only bar that was booked just for us. The catering provided by the casino was great, there was a nice selection of hot finger food available.

For my talk I spent the first 1.5 hours doing a lap around Windows Azure.

After that initial talk, I then did an hour talk on Windows Phone 7 series

I am doing a talk at my old user group I ran for 2 years, the Hobart .Net user group. If you are in Hobart come along and attend

Cloud computing has been getting a lot of attention lately, but what does it really mean and how does it effect you and your business? In this session David Burela will explain the fundamentals and building blocks of cloud computing and how they can be used to build scalable web applications. David will demonstrate how to develop with the Windows Azure platform and easily deploy your applications into the cloud.

Topics that will be covered

Bio: David Burela is a Tasmanian who went to the University of Tasmania and worked for “Federal hotels and resorts” for many years as a Graduate Analyst Programmer. Since leaving Tasmania he has worked for Readify as a Senior Devloper and now at Hazaa as a Senior Consultant. He won the international Microsoft programming competition, the ‘Imagine Cup’, with software project SOAK which aimed to assist farmers manage their farms through a cloud computing platform. Now David focuses on ways that Silverlight, Windows phone 7 series and Windows Azure can all be used in unison.

TechEd North America just wrapped up this week, so I have taken the time to pull together all of the Azure related topics into one area. As usual each of the sessions are available as streaming video through silverlight, but are also able to be downloaded in low and high qualities. Most sessions also have the slides available for download. So go ahead, download some of the sessions, then sit on your couch and watch them while you relax. Happy learning!

Microsoft has just released a new version of the Windows Azure SDK http://blogs.msdn.com/b/cloud/archive/2010/06/07/announcing-the-june-2010-release-of-the-windows-azure-tools-sdk.aspx

The most notable thing about this release is that it now works with the Visual studio 2010 RTM! so we can start building Azure applications with the latest tools.
Other notable features include

Burela's house-o-blog
Create a free website or blog at WordPress.com.